Wreck of the Columns is an old Roman wreck that sank while transporting huge blocks of marble out of Africa.

At the south eastern extremity of the bay of Capo Taormina there is an ancient Roman Wreck known as "Wreck of the Columns". More than two thousand years ago it sank as one of the biggest Roman Cargo Ships. The Vessel was coming from some north African province, transporting Columns of white Marble to build a Temple on some hill around Taormina.

It is positioned close to deep water, although immediately around it is a plateau of sand and rocky outcrops at less than 20 meter deep. Like Capo st. Andrea, the conditions here are highly influenced by both weather and current. It is best to turn up first and check the visibility before making the decision to dive. Moray eels are most commonly seen here in the months of June and August. Many different species of nudibranchs roam the sea floor and the shallow waters at the shallower parts of the drop-off. One of the best dive plans starts besides the wall into a little bay behind the extremity of Capo Taormina, from where you can explore the rest of this ancient shipwreck. 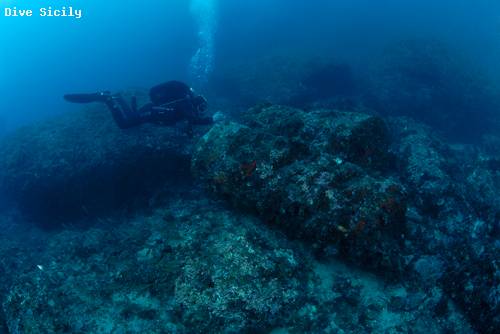