The Golfo di Patti was an Italian tourist ferry that sank because of a storm in the harbor of Naxos.

The Golfo di Patti was anchoring in the Harbor of Naxos, on the 18th of September 1984, when a fierce storm came up. She was ferrying tourists between Messina and the Sicilian coast. During the storm, the impact with the dock was so intense, that every joint between the metal plates broke and her bottom was completely ripped out. From the stern to the bow section; the entire wreck lies in one piece across a sandy bottom. The stern, propeller, rudder, winches and engine are still very well preserved. As a small part of the stern breaks the surface, the wreck is easy to locate.

An easy wreck to dive as she lies between the surface and 18m and is suitable for both experienced and open water divers. Due to her location, the Golfo di Patti is accessible in calm seas and preferably in the afternoon due to much boat traffic inside the harbour in the morning. It is perfect for a shallow last dive of the day. A very interesting aspect of this dive is the large concentration of encrusting organism with a dominant orange-red colour and in a very pristine condition.

The Golfo di Patti was renamed in 1976 to Gunilla and her final owner, Compagnia Gonzaga, renamed her again to the Golfo di Patti in 1980. She was built in Cantieri Navali La Spezia, Italy, launched in 1962. It was a tourist ferry of 48.5m long and 8m wide. There are 2 engines; a 6-cylinder diesel reaching a maximum speed of 12 knots. 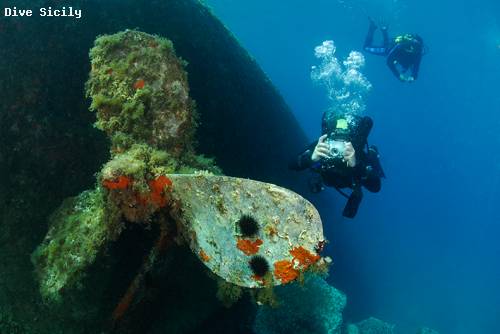