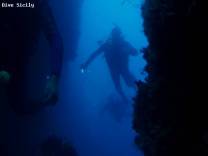 Sicily is a gem of traditions, multi cultural influences and with its splendid climate and warm seas a true divers paradise.

Sicily is known throughout the world for its scenery, excellent year-around climate, its beach potential, azul colored waters and underwater scuba diving paradise. It is the largest island in the Mediterranean and the first where African influences are felt. The capital Palermo situated on the northwest coast offers Norman architecture, churches, dining in style and is a great cosmopolitan city overlooking the Tyrrhenian Sea. One of the biggest highlights for tourists is climbing Mount Etna, Europe's largest active volcano. There are also plenty of archeological excavations worth a visit including Agrigento (the valley of the temples), but most tourists are not here for its historic sights.

There are quite a few attractive destination and island groups in the vicinity. North of Sicily you can find the Aeolian islands (often called Lipari Islands) known not only to scuba divers but also to volcanologist as it is the place where the volcanoes Stromboli and Vulcano are situated. The island Ustica is known for its volcanic origin, lava tubes and relatively deep dives. The Egadi Islands in the west, creating a mini-archipelago easily reached from Trapani and Marsala, is formed out Favignana, Levanzo and Marettimo. Cefalù, south along the western coast, is a popular beach destination where you can find the leftovers of castles, spectacular cathedrals and viewpoints beyond imagination. And in the south you can explore Catania, the second largest city in Sicily, and board a boat to the further located Pelagian Islands such as Pantellaria, Lampedusa, Linosa, Lampione, Ustica and Mozia. To the east we find the Ionian Sea with hotspots such as Taormina and Messina. Several scenic villages around the coast of Sicily are also known for its beach and water paradise. Taormina and nearby Giardini Naxos are known for their clubs, bars and resorts throughout the world.

Most of these locations are quite touristic, offer plenty of entertainment, have white yellow beaches and will make it a fantastic holiday.